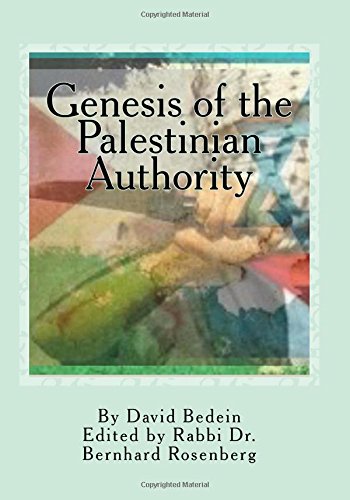 For 2 decades, the PLO and the UN have promoted the idea that The Palestinian Authority and UNRWA constitute innocuous entities which advocate peace in the Middle East. Few voices have shown the courage to challenge that narrative. One voice of courage in the media is David Bedein, who has worked with the visiting press in Jerusalem since 1987 presenting another point of view, conducting hundreds of news investigations which unmask the real policies that the mainstream media neglect to cover in the Palestinian Authority and UNRWA, which this book with reflect... How The Palestinian Authority creates financial incentives for anyone who murders a Jew? How UNRWA allows Hamas terror groups to take over its facilities? How the PA forges a military alliance with Hamas? How UNRWA and the PA adopt a war curriculum? How the PA hijacks Rachel's Tomb How UNRWA schools in Gaza are a greenhouse for Hamas military operations? How The PLO never changes its covenant to destroy Israel? How PA and UNRWA promotes a peace curriculum that does not exist?How a VATICAN official played a crucial role in the expose of PA schools and the PA constitution How Abbas praises the legacy of the Mufti, who was aligned with Hitler? How Abbas condems terror in English, not in Arabic? How an anti-Semitic state is being spawned in Ramallah? How The PA army presents an unprecedented threat? How Aid to a Gaza regime at war with Israel will backfire on Israel? The US finances UNRWA "right of return" indoctrination? How People ignore the consequences Of A Palestinian Arab State How the Demand to Return to Villages from 1948 Is Real. How the Iranians armed summer camps for UNRWA students. How The Myth was promulgated of a supposed holocaust curriculum in UNRWA schools.

Here are a number of topics that Bedein’s book and research shed light upon:

In 1993, the PLO and Israel signed the Oslo accords, in which the PLO agreed to fight terror and disarm Hamas, end incitement against Israel and cancel the PLO covenant which called for Israel’s destruction. Bedein hired an Arab TV crew who filmed the PNC (Palestinian National Council) session where the PLO covenant was being discussed, and was the first reporter to reveal that the PLO covenant was never cancelled.

At the Nobel Peace Prize press conference in 1994, Bedein asked PLO leader and Nobel peace laureate Yasser Arafat as to whether Arafat would disarm the Hamas, to which Arafat responded that "I do not understand the question. The Hamas are my brothers."

David Bedein was the first journalist to research the Palestinian Constitution, which very few people know even exists, in which the “right of return” to homes and villages from 1948 remains a fundamental right. Bedein noted that this document makes no mention of civil rights and to this day the PA regime still calls for the destruction of Israel.

This book also reports on David's coverage of the new PA armed forces – often trained in the US – who have included terror groups in their midst and who have repeatedly turned their weapons against Israeli soldiers and civilians and violated human rights within the PA.

Bedein brings down numerous sources which document that the “moderate” faction of the PA still calls for the destruction of Israel.

The book has several quotes of Fatah leaders calling for war against Israel, with the end goal being its destruction.

The book also brings documentation that names PA president Mahmoud Abbas was the financer of the 1972 Munich Olympics massacre.

It also does not sugar coat Abbas’ PhD thesis, which concludes that the Zionist movement worked with the Nazis, Jews, collaborating with them because the Zionist leaders viewed “Palestine” as the only legitimate place for Jewish immigration.

Abbas is also quoted in the book praising Hajj Muhammad Amin Al-Husseini – Jerusalem’s Mufti – who took part in planning the Nazi extermination of the Jews.

Abbas has never retracted these views, yet he is viewed worldwide as a moderate Palestinian leader.

Bedein notes that Abbas has used the PA security forces to stop dissent, retaliate against critics and opponents and pursue Palestinians selling land to Jews – a crime punishable by death in the PA.

Numerous articles in the book document how UNHCR (United Nations High Commissioner for Refugees) resettle refugees to end their plight, UNRWA – created specifically on for Arab refugees in 1949 – has confined 650,000 refugees from 1948 to 59 refugee camps, passing refugee status to roughly five million descendants. UNRWA was formed in order to promote the supposed “inalienable right” of Arab refugees to return to villages where they lived before to 1948. To this day UNRWA continues to confine hundreds of thousands of descendants of Arab refugees to their refugee facilities, where they languish under the premise and promise of the “Right of Return” to villages that no longer exist.

Bedein’s provides voluminous research which documents how UNRWA camps have become breeding ground for terrorists and their school system calls students to join the armed struggle to realize the “right of return”.

Paletinian Arabs are quoted throughout the book as describing UNRWA’s assistance as “meaningless”, since it does not improve their day to day lives in the slightest, but rather holds out hope for the destruction of Israel at which time – and only then – UNRWA refugees would be allowed to return to their villages. It makes no effort to seek long-term solutions for descendants of refugees who have wallowed in the indignity of refugee life for nearly 70 years.

The Hamas terror organization’s takeover of UNRWA is well documented in this book, which explains how it used UNRWA schools and facilities to store and fire rockets at Israel.

Bedein writes numerous articles which are cited in this book which point that the news media, along with successive American and Israeli administrations have turned a blind eye to Arab incitement and terror, instead attempting to push forward the peace process, while the Palestinian leadership has done everything besides promote peace.

Read less
5.0 out of 5 starsExellent book
ByInternational Lawyeron June 28, 2017
Excellent book. I learned a lot on the American and European role.